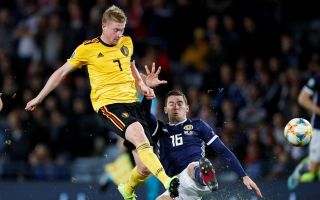 Manchester City star Kevin De Bruyne was on fire for Belgium last night as he hit a hat trick of assists for his country in their 4-0 thrashing of Scotland.

City fans will be all too used to quality like this from their star playmaker, but De Bruyne’s immense international display apparently saw him make an impressive piece of history.

MORE: Man City star risks being in trouble with his mum after going public with girlfriend

According to the Daily Mirror, the 28-year-old’s three assists in one European Championship qualifying match set a new record at this level.

While De Bruyne may make it look so easy, this stat indicates it’s clearly not as simple as it looks, with many previous greats at this level clearly failing to manage something quite that productive.

De Bruyne missed much of City’s season last term through injury, but his return to peak form this year will surely make them favourites to win a number of big trophies again.

The Belgium international is quite simply unplayable on his day, and that was bad news for Scotland last night, and will now be bad news for the rest of the Premier League as club football returns this weekend.