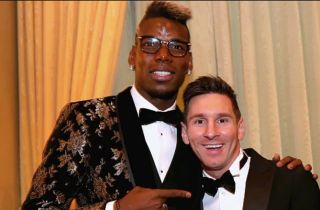 Paul Pogba’s brother, Mathias, has revealed that the Manchester United midfielder has held discussions with Lionel Messi regarding a possible move to La Liga for the Red Devils man.

As per AS, Pogba was linked with a move to Real Madrid during the summer transfer window, however ultimately, the Frenchman ended up staying at Old Trafford until at least January.

And now, it seems like the player’s brother has confirmed that Pogba has spoken with a number of players about a possible move to Spain, with one of these players being Lionel Messi himself.

As per the Mirror, Pogba has talked about moving to La Liga with the Barcelona talisman, with the Blaugrana themselves even being linked with a move for the player during the summer.

The report also notes that Mathias Pogba has confirmed Paul Pogba’s discussions with certain players about moving to Spain, stating that “I know he’s spoken with a few players, but not Ramos. Who? Oh, Messi. Sometimes, not always. Zlatan. Griezmann, because of the national team.”

Given that the summer window is now shut, it’ll be interesting to see what happens with Pogba’s future in the upcoming transfer window, as given this report, it seems like the player is eyeing up a possible move to Spain.

United fans will surely have been delighted that their side were able to keep ahold of Pogba beyond this summer’s deadline, with the Red Devils now able to call upon the Frenchman until at least January at the very earliest.

However, it does seem like the French international has one eye on a move to Spain if his brother’s words here are anything to go off…