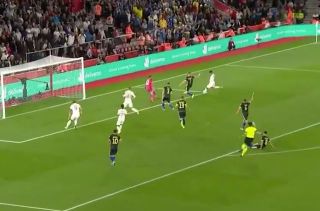 England suffered an early blow against Kosovo on Tuesday night, but they gradually began to run riot in the first half to take a 5-1 lead.

Goals from Raheem Sterling, Harry Kane and an own goal turned the game around after they conceded in the opening minute of the encounter, and then it was Jadon Sancho who bagged a quick-fire double in the closing stages of the first half to really put the icing on the cake.

However, he will owe a big debt of gratitude to Sterling, as the Manchester City star was in stunning creative form as he produced two excellent assists for the Borussia Dortmund ace.

As seen in the videos below, Sterling turned provider not once but twice as he carved open the Kosovo defence and put Sancho in a great position to get his first goals for England.

To his credit, the 19-year-old kept his composure and finished them off well, and so Gareth Southgate will be delighted with how his side bounced back from the early blow to take a commanding lead in at the break.

As for Sancho, he’ll be thrilled to have bagged his first international goals and he’ll certainly hope that there are plenty more to come in the years ahead…

Jadon Sancho gets his first ever international goal against Kosovo!