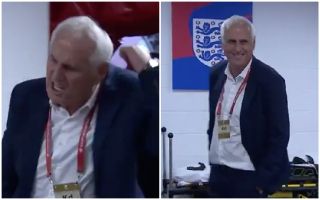 Kosovo coach Bernard Challandes had already made a name for himself ahead of the clash with England on Tuesday night, but he delivered another priceless moment during his side’s 5-3 defeat.

The 68-year-old delivered what can only be described as a passionate press conference prior to the game as he outlined the strategy for his players on how to get a positive result against England.

SEE MORE: Video: ‘Next Phil Jones’ – Some fans react to Maguire giving away a penalty for England

To their credit, they nearly produced a huge upset as they took advantage of some sloppy England mistakes but eventually lost 5-3 in a thriller at St. Mary’s.

However, Challandes produced another contender for moment of the night in the video below, as he initially looked furious after the decision to award Jadon Sancho’s first goal.

While it appeared as though he was livid as he walked down the tunnel, he suddenly decides to turn and face the camera and hilariously flashes a quick smile which left the ITV pundits in hysterics as they couldn’t help but laugh at the sudden change in mood.

Challandes has certainly established himself as quite the character this week, and beyond that, Kosovo showed that they’re a talented side that can give top teams problems on their day.

But he always has a smile for the camera! ?? pic.twitter.com/yG066Rounj 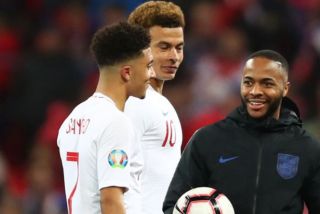