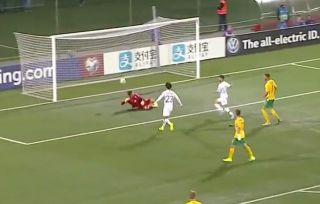 Cristiano Ronaldo was in the goals on Tuesday night as he attempted to lead Portugal to a crucial win over Lithuania.

With Ukraine leading the way in Group B in Euro 2020 qualifying, the reigning European champions will have been desperate for all three points this week.

Ronaldo gave them an ideal start with an early lead, but they were soon pegged back as concern would have been building over the possibility of a slip-up.

However, the Juventus superstar had other ideas as he scored three more, although as seen in the video below, he may have a tough time claiming his second after a howler from Lithuania goalkeeper Setkus.

It was a tame effort in truth from the 34-year-old, but somehow the shot-stopper couldn’t bring it under control and allowed it to bobble on top and over him as the ball went into the back of the net and Ronaldo began his celebrations.

He won’t care one bit though as he continued his incredible goalscoring record and led his side to a crucial win.

Cristiano Ronaldo looks to have got his 91st international goal after a blunder from Lithuania goalkeeper Setkus!

Another goal for Ronaldo! The visitors look to be cruising to victory now.

Who else but Cristiano Ronaldo… he's got another!