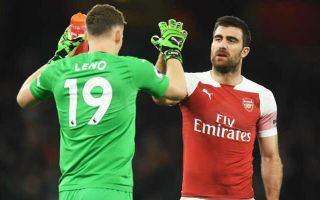 Arsenal goalkeeper Bernd Leno is of the opinion that the Gunners are THE club in London ahead of Chelsea and Tottenham.

The German goalkeeper joined the North London club from Bayer Leverkusen last summer and became their first-choice custodian following an injury to Petr Cech. So far, Leno has made 40 appearances for Arsenal, keeping 10 clean sheets.

SEE MORE: “He will work hard for the team”- Arsenal loanee hailed by Arsene Wenger

When asked to compare the Gunners and Bayer Leverkusen, Leno told Sport Bild as quoted by talkSPORT: “You can’t compare that, of course Arsenal is a world club, THE club here in London. Not Chelsea, not Tottenham – Arsenal is the club here with fans around the world. No matter where we are, also in the USA or in Asia, there are many fans of Arsenal everywhere.”

The 27-year-old was in Germany’s squad for their Euro qualifiers against Netherlands and Northern Ireland but was an unused substitute in both matches.

Leno will hope to keep a clean sheet this weekend when Arsenal play Watford at Vicarage Road.

Arsenal ‘very likely’ to sign talented 25-year-old this summer per reporter, in move that could see longtime starter replaced in the lineup