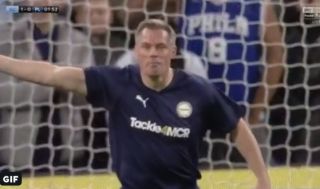 Jamie Carragher and Gary Neville are known for some fiery debates and a bit of banter during punditry duty for Sky Sports, and they were the focus early on tonight in Vincent Kompany’s testimonial.

The pair were both in the Premier League All Stars team against Manchester City Legends, and Neville didn’t do too well on this opening goal by Martin Petrov.

Watch above as Carragher immediately slams Neville for not staying closer to his man, with the Liverpool legend also mentioning it in his post-match interview.

The game finished 2-2 with this strike from Robin van Persie the pick of the bunch.

"He gave a goal away in the first minute, pulls his hamstring and then after he goes off – we're fine!" ?@Carra23 still isn't happy with @GNev2…? pic.twitter.com/lq9UF106E3