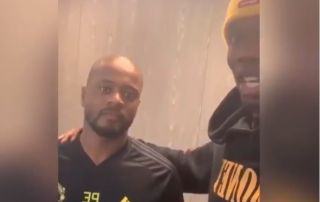 Manchester United midfielder Paul Pogba was told to ‘be serious’ by former Red Devils star Patrice Evra as he spends time back at his old club.

As reported by the Manchester Evening News and others, Evra is back with Man Utd to do his coaching badges and is clearly in no mood for messing around.

Patrice Evra not in the mood for jokes with Paul Pogba ?#MUFC

Normally known for being very jokey and eccentric on social media, it seems Evra is eager to focus on his new job, even if he’s being slightly tongue-in-cheek in the video above.

Some United fans, however, will no doubt notice Evra telling Pogba to be serious and ‘work’ – something the 26-year-old has been criticised for in the past as he’s deemed as not putting in enough effort on the pitch and for spending a lot of time showing off his dance moves and new haircuts on social media.