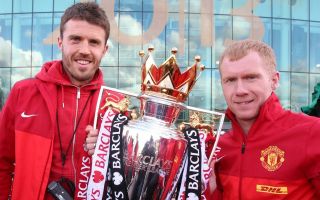 The former Red Devils midfielder is one of the many legends involved tonight, along with some other former Old Trafford heroes like Paul Scholes, Gary Neville, Ryan Giggs and Robin van Persie.

Still, it’s Carrick really catching the eye, with United fans insisting he’s better than Paul Pogba and their other midfield options after their poor start to the season.

The 38-year-old only retired just over a year ago, so could probably still do a decent job at the highest level, even if it’s pretty unlikely to happen.

However, Scholes notably retired and then returned not long after, so perhaps MUFC fans are justified in wishing for it to happen again.

Micheal Carrick plays better than pogba. He's so good even at his age

Get Carrick out of retirement. https://t.co/zd59n6E32D

United would be better of with Carrick instead of Pogba #RollsRoyce

Carrick is going to have to do a Scholesy and come out of retirement, still better than all our midfielders

Carrick performing better today than Pogba has all season, lmaoooooo

Michael Carrick still better than Matic and McTominay on this evidence