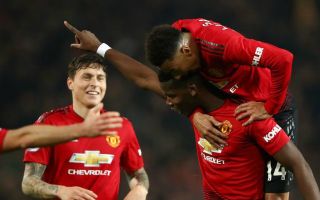 Manchester United are reportedly in talks regarding new deals for Jesse Lingard and Victor Lindelof.

According to Gazzetta Dello Sport journalist Nicolo Schira, the Red Devils are trying to convince the duo to sign new contracts that would keep them at Old Trafford till 2024. Schira wrote on Twitter: #ManchesterUnited are working to renew Victor #Lindelof and Jesse #Lingard until 2024. Talks ongoing.

Lingard is a product of Manchester United’s youth setup and has made 171 appearances for the senior team, scoring 29 goals and providing 18 assists. This season, the 27-year-old has featured in all of the Red Devils’ matches.

Lindelof has made 73 appearances for Manchester United since joining the club from Benfica in the summer of 2017, scoring a goal against Burnley and assisting once in a match against Crystal Palace.

Given how frequently the two players have started under Ole Gunnar Solskjaer, tying them down to new contracts will certainly help the club. Lingard is a senior player in the side and having him around can certainly help the younger players, particularly the ones who have graduated from Manchester United’s academy. Lindelof is a pretty decent centre-back and having him for the longer run will help the Red Devils.

Both players were included in their respective country’s squad for the international. While Lingard withdrew from England’s squad due to illness, Lindelof featured in both of Sweden’s Euro qualifiers against Faroe Islands and Norway, scoring against the former.

Video: Man United fans have to be excited by this as Raphael Varane does what Bailly and Lindelof could only dream of for France vs Germany