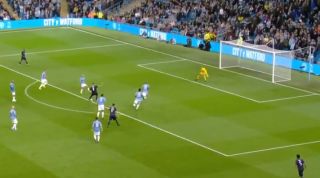 Watch below as the Dutchman hits a superb low and powerful finish into the corner to make it 2-1 to the Premier League All Stars in tonight’s testimonial match for Vincent Kompany.

The Premier League All-Stars take the lead after some lovely play, how about that backheel from Tim Cahill…?

Van Persie only retired from football at the end of last season, and is clearly as sharp as ever tonight, having also assisted an earlier goal for Robbie Keane.

Man Utd fans watching are getting nostalgic about Michael Carrick‘s performance and some will no doubt want Van Persie out of retirement now too after this quality finish.