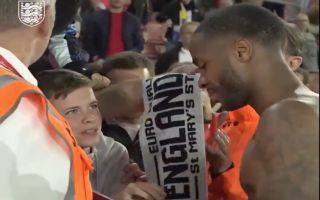 Raheem Sterling gave his boots away to young England fan yesterday following his dazzling performance against Kosovo in Euro 2020 qualifying.

The Man City winger bagged one goal and three assists at St Mary’s last night, as he guided the Three Lions to an exciting 5-3 win over Kosovo in Southampton.

And following the match, Sterling ended up giving one young fan the pair of boots he wore during the match, something that lead to loads of fans lauding him on Twitter.

As seen above, Sterling handed his boots to a young fan after he asked for them, a gesture that would’ve definitely made the youngster’s day!

And following this, it seems England fans can’t get enough of the forward at the minute, and we certainly cannot blame them!

Class act on and off the pitch, Raheem Sterling??

Class on and off the pitch ??

Classy act from a top professional, come to expect nothing less from him ?