Rangers winger Ryan Kent has expressed his disappointment in the way Liverpool dealt with his Anfield exit during the summer transfer window.

The 22-year-old moved to Ibrox in a £7 million deal on September 3, signing a four-year deal with the Scottish side after a successful loan spell last season – as per BBC Sport.

The English ace scored six goals in 43 appearances for Rangers before returning to Anfield to contribute to Liverpool’s pre-season campaign.

Gers’ boss Steven Gerrard tried to bring Kent back to the club on a second season-long loan deal, but the Reds were unwilling to let him leave again on a temporary basis.

Kent eventually forced through a permanent switch to Ibrox, but he has now slammed Liverpool for their “lies” which held up his summer transfer away from Anfield.

“It was very tough,” he told a press conference on Thursday – as per Team Talk.

“I had to stay mentally strong, when you are told you can do one thing and then you are lied to and it doesn’t happen, that is quite hard to take.

“I just had to keep myself fit and train on my own and make sure I keep my fitness levels up and I was waiting for a moment like this to arrive.

“There’s no bitter taste, the thing that I wanted from the start happened at the end so I am just happy with that. 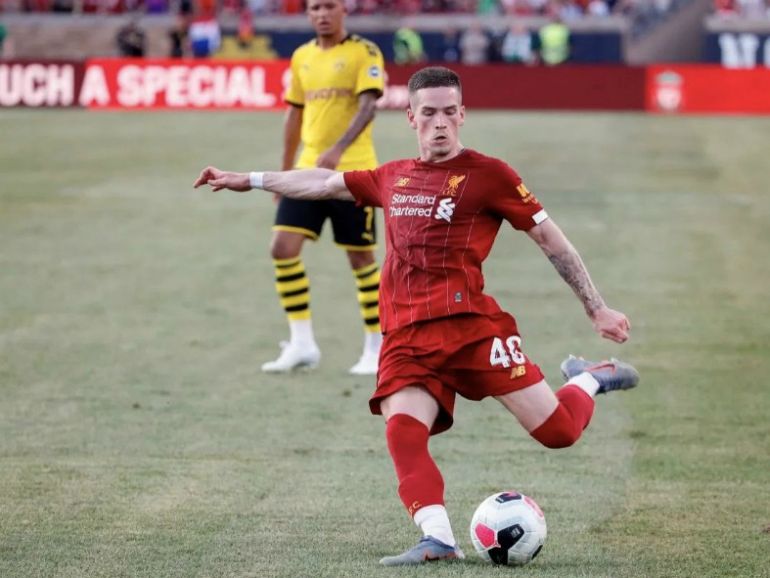 Ryan Kent in action for Liverpool during pre-season.

“I would have liked to have been here from the start, it is quite difficult watching it on the TV wishing I was part of some of the games but I am delighted to be back and I can’t wait to get going.

“There were probably some slight concerns along the way when I thought this might not happen and I might have to plan for something else but I always had a feeling that it might go to the last day of the window and that’s what happened.”

Kent was on Liverpool’s books for four years in total, but he only managed to make one senior-level appearance, in-between loan spells at Coventry, Barnsley, Freiburg and Bristol City.

The midfielder claims that he finally feels at “home” in the Scottish Premier League with Rangers, as he added: “For once in my life to be feeling at home somewhere, to be actually enjoying my football, I want that feeling for the rest of my career. I felt that for the first time when I came here.

“So just everything as a collective at this football club I think gets the best out of me and my football.”