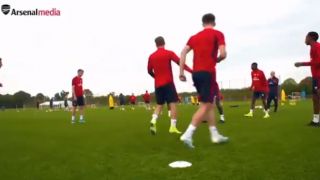 Arsenal new-boy Kieran Tierney only just started training with the club today after injury and he’s already made a fool out of Shkodran Mustafi.

Watch the video below as the Scotland international manages a cheeky nutmeg on the German, who’s become a bit of a laughing stock at the Emirates Stadium after some calamitous displays.

Tierney certainly found it pretty easy to trick him with this bit of skill, and it’s going down a real treat with these Arsenal fans.

Kieron Tierney casually megging Mustafi on his first Arsenal training session. Safe to say he’ll be a fan favourite if he keeps that behaviour up! #afc

That moment Tierney netmegged Mustafi & all he could scream was NO, NO, NO! Ladies & gentlemen, I present to you, the man who's never wanted by anyone, not even his teammate ???

That laugh by Lacazette though ?#COYG pic.twitter.com/0uQhYfAEwr

Tierney nutmegs Mustafi in his first training session after returning from injury ? pic.twitter.com/PyzJKslfps