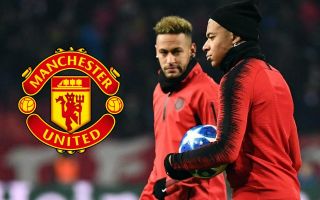 The Red Devils would then pay an additional €50-80m of their own to try and get a deal done for the Brazil international next summer – as long as they qualify for the Champions League, according to Diario Gol.

Neymar would no doubt be a sensational signing for Man Utd, who could do with a big signing of this type to lift the mood at Old Trafford right now.

Neymar may not be everyone’s cup of tea after a troubled two years at PSG, but there can be no denying that on his day he’s a joy to watch and the kind of talent that can improve almost any team in the world.

United would surely benefit from the 27-year-old arriving and improving their attack, which is significantly weakened after the summer sales of Romelu Lukaku and Alexis Sanchez.

The likes of Marcus Rashford and Anthony Martial haven’t really got going yet this season and if MUFC could just scrape into the top four and land the transfer of Neymar with help from Chevrolet, it could be great business to help them on their way to becoming a force in England and Europe again.