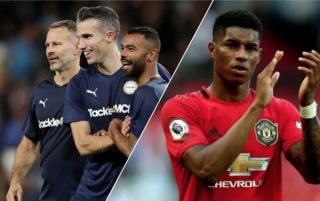 Robin Van Persie showed age is just a number yesterday, as he put in a solid performance for ‘Premier League Legends’ during Vincent Kompany’s testimonial match.

Kompany’s testimonial was held at the Etihad Stadium last night, as players from Man City and the Premier League, past and present, came together to celebrate the Belgian’s career with the Citizens.

Kompany’s side contained players such as Aguero, Silva, Hart, Toure, Lescott, Zabaleta and Ireland, with their opponents’ side containing the likes of Keane, Scholes, Giggs, Neville, Van der Sar and Van Persie.

The match itself ended up finishing 2-2, with Van Persie and Keane scoring for PL legends, whilst Petrov and Benjani bagged for the ‘home’ side.

And following the match, Man United fans took to Twitter to claim that the retired Dutchman is a better player than current ace Marcus Rashford.

Van Persie was brilliant during his first season at Old Trafford following a move from Arsenal, as the Dutch international almost single-handedly fired the club to their 13th PL title.

And it seems United fans still haven’t forgotten how good RVP was for them, and how he compares to their current striking options, if these tweets are anything to go off.

Van Persie could genuinely do a job for us, still a better finisher than Rashford.

RVP can still play for United. Much better than Rashford / Dan James…. #MUFC

RvP is still better than Rashford in 2019 ? https://t.co/jpciMbFEca

Even RVP is still a better finisher than Rashford, might as well have all of these players back into the team!