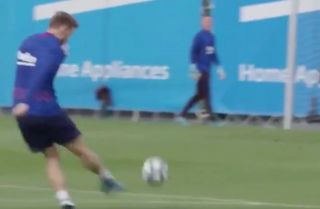 Ivan Rakitic has struggled for playing time so far this season, but the Barcelona stalwart offered a reminder of his quality in training this week.

As seen in the video below, the Croatian international produced a screamer from distance to find the back of the net in training, and it certainly caught the club’s Twitter admin’s eye.

However, it remains to be seen whether or not it leads to more minutes from coach Ernesto Valverde, with Rakitic being left on the bench for the clashes with Real Betis and Osasuna, while he came on for 45 minutes in the defeat to Athletic Bilbao on the opening weekend.

It appears as though the 31-year-old may well have slipped down the pecking order at the Camp Nou, despite the fact that he has been a fundamental figure over the years having made 50 or more appearances in each campaign he has been with the Catalan giants.

On top of that, it seems as though his exploits in training aren’t enough to impress all Barcelona fans, as seen in the comments below, as some are still adamant that they would prefer to see him move on and perhaps give the likes of Arthur and Frenkie de Jong the opportunity to now become permanent fixtures in the Barcelona midfield moving forward.

Ffs out of all possible propaganda

My player…ignore all the haters racki

Yep, he sends more objects into orbit than NASA

Agreement reached: Barcelona star having medical today ahead as he closes in on transfer to La Liga rivals Aug 31 2020, 14:28
FC Barcelona

Barcelona star will be cutting salary in half in order to seal exit with deal close Aug 28 2020, 13:20
FC Barcelona