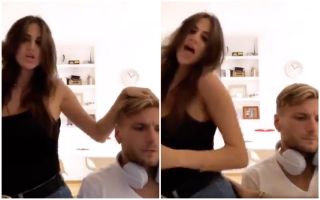 Despite her best efforts, Jessica Melena simply couldn’t distract her partner Ciro Immobile from his gaming session this week.

As seen in the video below, the Lazio and Italy striker was seen heavily invested in his computer or console, and Melena decided to have another crack at distracting him.

We’ve seen the pair post images before as Immobile is evidently a very keen gamer and she has to do her best to get his attention, but not even Melena’s best moves could take his eyes off the screen for long, as seen below.

It’s noted by Marca that he was most likely playing FIFA during his down-time as he prepares to return to club duty after the international break, but there are surely few others who would prioritise any game over Melena.