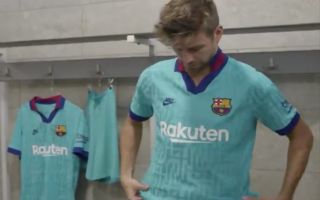 Barcelona announced their new third kit this morning, however despite it looking alright, most fans weren’t impressed with it at all.

Barca have already confirmed their home and away strip for the 2019/20 season, with the club rocking a chequered home strip and a very nice yellow away number.

And now, the club have announced their third kit for the upcoming year, and despite us thinking that it’s looks alright, most fans aren’t too keen on the new strip.

The colour is awful

Looks horrible. Nobody needs the nike on it. Just the swoosh would be fine, but now it looks horrible