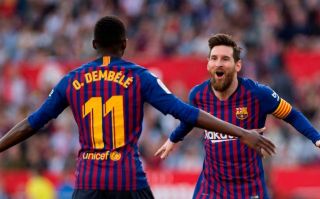 Lionel Messi has done his part to try and give the best advice to Ousmane Dembele to ensure he helps Barcelona secure success moving forward.

The 22-year-old has had a stop-start stint with the Catalan giants thus far, as injuries and off-the-field issues have been a problem.

That in turn has seen him limited to just 66 appearances for the reigning La Liga champions despite joining them in 2017, while he has 18 goals and 17 assists in that time.

With Philippe Coutinho moving on and the likes of Messi and Luis Suarez not getting any younger, there is no doubt that much more is expected of the Frenchman moving forward, especially when you consider that they spent £135.5m to sign him, as per BBC Sport.

It’s seemingly all there for him to shine at one of the biggest clubs in Europe with one of the best players of all time next to him to learn from, and yet it’s been a rather underwhelming stint thus far.

In turn, Messi has revealed the type of advice that he’s given the talented winger, but time will tell whether or not he listens and puts it into practice.

“He has impressive qualities, he can do what he wants, he is very young and this year is very important for him to make the leap that all of Barcelona wants him to make,” he told Sport.

“He must make the change to be professional, to put that in his head, to make it a goal for himself to succeed in Barcelona, ??as he wants. I hope he doesn’t have the bad luck he had in recent years with injuries because last year, when we needed him most, he was injured. Hopefully this year it doesn’t happen like that again and he can show everything he has, which is a lot. As a player, he’s impressive.”

Dembele is currently out injured which isn’t a huge help for anyone, but coach Ernesto Valverde will hope to welcome him back to the fold sooner rather than later to help his side improve on their mixed start to the campaign.