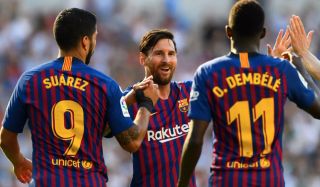 Barcelona have confirmed their squad to take on Valencia in La Liga on Saturday, with manager Ernesto Valverde opting to include both Junior Firpo and Luis Suarez in his side’s squad to play Los Che.

As seen in the tweet below, both Suarez and Firpo have been included in Barca’s squad to challenge Valencia at the Nou Camp tomorrow, as the club look to get back to winning ways following their 2-2 draw with Osasuna before the international break.

This news comes after Suarez has been out injured for a fair few weeks after he picked up a problem during his side’s match vs Athletic Bilbao last month, whilst Firpo has seemingly recovered from his injury in time to make Barca’s squad to play Valencia.

Despite this boost, Messi is still nowhere to be seen in the Blaugrana’s squad for tomorrow’s game, something that won’t go down well with the club’s fans.

Messi himself declared that he will not be taking on Valencia this weekend due to him still dealing with a calf injury he picked up last month, with Barca’s squad announcement only now fully confirming this.

Both Ousmane Dembele and Samuel Umtiti both miss out through injury, something that means young duo Jean-Claire Todibo and Ansu Fati have been called-up to the club’s first team.

The rest of Barcelona’s squad can be seen down below. Any other surprising inclusions in there? Let us know down below…