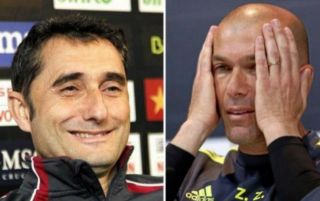 Barcelona have been handed a golden chance to beat fierce rivals Real Madrid in the race to sign Borussia Dortmund and England youngster Jadon Sancho.

Sancho has been absolutely brilliant these past 12 months or so, with the 19-year-old contributing 16 goals and 23 assists in all competitions since the start of the 2018/19 campaign.

This form has seemingly caught the eye of some of the world’s biggest clubs, with two of these being Spanish giants Barca and Real.

As per Don Balon, both the Blaugrana and Los Blancos are in the hunt for the Three Lions youngster, with Ernesto Valverde’s side recently being offered the chance to beat their rivals to the signing the Englishman for a reasonable fee.

According to the report, Dortmund have offered Sancho’s signature to the Catalan side in return for Ivan Rakitic and a fee of €120M, a very reasonable deal that, somehow, hasn’t convinced Barca, with the two clubs now set for talks in January over a possible switch for the wonder-kid.

Given that Rakitic is in his 30’s, combined with the fact that the Blaugrana could do with some attacking reinforcements before the season’s end, going through with this deal seems like a no-brainer from our point of view.

Barca only really have Dembele, Messi, Suarez, Griezmann and Perez as their attacking options this season, thus the club could really do with adding to this if they are to get their hands on the Champions League and/or La Liga titles come May.

And it seems like they have the perfect opportunity to do this in the form of Sancho’s arrival if this report from Don Balon’s anything to go off.