Arsenal have been handed some good news ahead of their match against London rivals Watford this weekend, after Unai Emery confirmed that both Lucas Torreira and Granit Xhaka are available for the clash.

Torriera and Xhaka’s availability for Saturday’s game was seemingly thrown into doubt earlier this week after Physio Room reported that the midfield pair had both picked up injuries whilst on international duty these past two weeks.

Granit Xhaka (Achilles) and Lucas Torreira (knock) will be assessed after picking up injuries while representing their respective national teams. #SUI #URU #AFC

However despite this, it seems like both players will be available for selection tomorrow, after the Sun noted that manager Unai Emery’s confirmed the duo are “ready” to play against the Hornets.

This news will come as a big boost for the north London side, as both Xhaka and Torreira have played key roles for the club’s first team during the last 12 months or so. 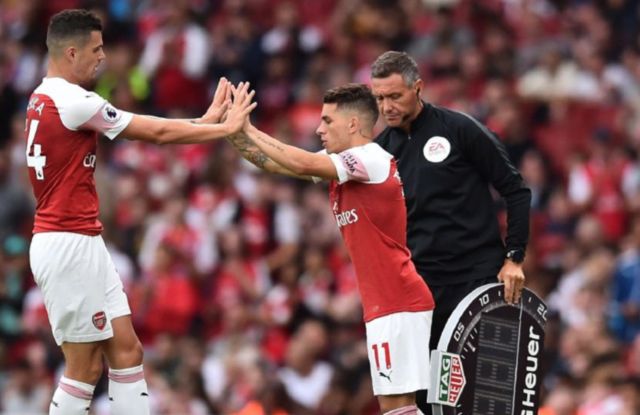 Xhaka and Torreira will be available to play vs Watford tomorrow

Given this news, Arsenal fans will surely be very optimistic regarding their side’s chances of coming away from Vicarage Road with all three points tomorrow afternoon, especially given the form their opponents are in.

Watford have managed just one points from their opening four league games this term, form that lead to the club sacking manager Javi Gracia and replacing him with former boss Quique Sanchez Flores.

The Gunners will be looking to get back to winning ways this weekend following their 2-2 draw with north London rivals Spurs before the international break.

And a lot of their fans will be expecting them to secure their third win of the season on Saturday, especially now that they have both Torreira and Xhaka are fit and ready.