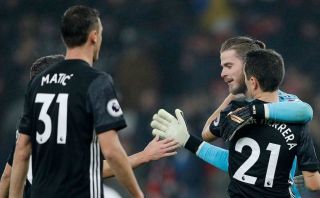 Manchester United midfielder Nemanja Matic will reportedly leave the club next summer when his contract runs out with Inter and AC Milan interested in signing him.

The Serbian international joined the Red Devils from Chelsea in 2017 and has so far made 88 appearances for the club, scoring three goals and providing as many assists.

This season, the 31-year-old has played just 22 minutes on the pitch as Ole Gunnar Solskjaer has benched him in favor of Paul Pogba and Scott McTominay.

Matic’s current contract with Manchester United expires in the summer and according to Calciomercato, the Serb will leave Old Trafford with Inter and AC Milan interested in signing.

Given the current scenario, unless either of Pogba or McTominay sustain a long-term injury, Matic could well be on the bench for most of the season. This could seriously hamper his chances of making Serbia’s playing XI in Euro 2020 provided they qualify.

A move to Italy could help Matic in terms of game time. AC Milan have some pretty good players in midfield and the addition of the Serbian international could add more depth to it.

Inter Milan have already signed two players from Manchester United so it won’t be much of a surprise if another one joins them next summer. Matic has previously played under Antonio Conte during his spell at Chelsea and his addition could certainly help the Nerazzurri’s aim of winning the Serie A.