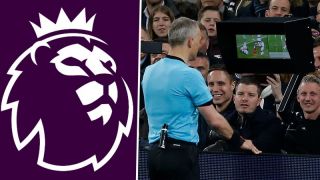 Referee chief Mike Riley believes that VAR has got four major incidents wrong so far this season as he picked out faults with the system.

After years of controversial decisions, the governing bodies have decided to take steps to eradicate them from the game with the use of VAR.

On the whole, it has arguably been a huge benefit to the game as it has helped officials reach the right decisions on countless occasions. However, there are still times when it doesn’t work as desired, and Riley believes that has been evident on four specific occasions in major incidents in the Premier League.

As per Sky Sports, he has cited Fabian Schar’s equaliser for Newcastle against Watford and Leicester midfielder Youri Tielemans’ apparent stamp on Bournemouth’s Callum Wilson as two in question.

Further, the referee’s decision not to award Manchester City a penalty against Jefferson Lerma for a challenge on David Silva and denying West Ham a penalty when Sebastien Haller was brought down by Norwich’s Tom Trybull have all been under the spotlight.

Naturally, there will be fans from other clubs who have been left furious with decisions that have gone against them already this season despite the introduction of VAR, not least Aston Villa and their disallowed equaliser against Crystal Palace prior to the international break.

Time will tell if lessons are learned and the system is improved moving forward, but it appears as though it isn’t entirely ridding the game of bad decisions.