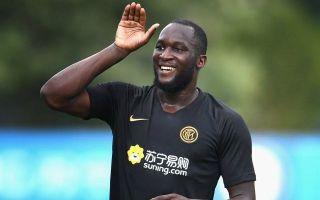 Inter striker Romelu Lukaku said that his love for the club and the fact that he was made the scapegoat at Manchester United was why he wanted to leave England.

The 26-year-old played for Chelsea, West Bromwich Albion and Everton before joining the Red Devils for a transfer fee of an initial £75 million as reported by BBC. He had a decent first season, scoring 27 goals in 51 matches but his second one was far from impressive. Lukaku scored only 15 goals in 45 appearances during 2018/19.

He joined Inter this summer for a club-record transfer fee reported to be £74 million by BBC. Lukaku has started his Nerazzurri stint well, scoring in both of the club’s matches.

The Belgium international told ESPN FC that he wanted to leave England because he was often scapegoated while at Manchester United. As quoted by Goal.com, the 26-year-old said: “Scapegoated. Meaning ‘You. Are. The. Reason.’

“This could be the team I need. There’s the love I have for this area. The love that I have for Inter. And it was the perfect moment for me to leave England. I didn’t want to be there anymore.”

So far, Lukaku has done well and provided he maintains a good run of form this season, Inter Milan can actually win something.

The Nerazzurri play their next Serie A match against Udinese on Saturday.