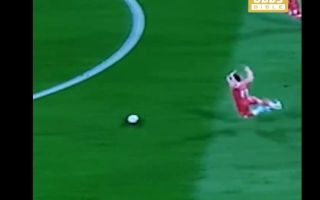 There will be fans who claim that Mo Salah goes down far too easily, they might even suggest he’s a diver. I’m sure Liverpool fans will vehemently disagree with that assessment but there have been plenty of soft fouls awarded to the Egyptian over the past couple of years.

Fifa 20 comes out soon, and it looks like the developers have added a new feature which allows Salah to swan dive even with nobody close to him. This clip comes via a tweet from Sportsbible:

It looks like the defender about five yards behind him thinks about trying to bring him down, so perhaps this is Salah simply “anticipating contact”

All joking aside, it is a pretty funny snapshot of the game which will undoubtedly be billed as ” the most realistic football simulation yet”

The demo is currently out for anybody who can’t wait for the game’s release later this month.