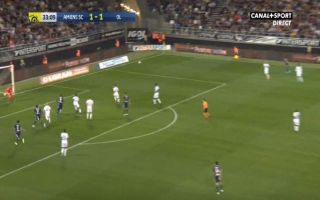 It was always going to be interesting to see how Moussa Dembele would handle the step up to Ligue 1 after leaving Celtic last Summer. He’s still been prolific and attracted the interest for giant clubs, so it’s fair to say his move has been a success.

He showed his penalty box prowess tonight as he did well to adjust in mid air and stuck a flying volley away to give Lyon a 2-1 lead against Amiens.

Sky Sports linked him with a move to Man United in the Summer as a possible replacement for Romelu Lukaku. If he keeps scoring for Lyon then they might revisit that interest next Summer.