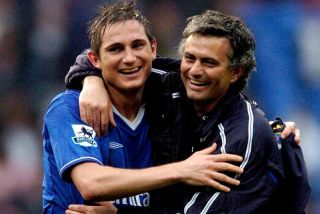 Jose Mourinho is confident that Frank Lampard will be a success as Chelsea manager and has revealed his reasons why.

The Portuguese tactician will of course know him well from their time together at Stamford Bridge, with Lampard playing a pivotal role in the success that they enjoyed.

Further, having spent time out of the game since last December, the former Manchester United boss may well have been keeping a closer eye on things around him and charted Lampard’s progress with Derby County in the Championship last season.

Combining the qualities that Lampard has from his playing days and his coaching career thus far, Mourinho sounds adamant that the Blues boss has all the ingredients necessary to be successful in his current position.

“One thing is the player, another thing is the manager,” Mourinho said, as per Sky Sports. “He plays for big things. He plays Champions League, he played a European Super Cup, he had already big matches in his hands, and he has to grow up with the level of experiences, which I believe he can because he has huge experience.”

That said, it’s been a difficult start for Lampard as Chelsea have picked up just five points from their opening four Premier League games of the season, while they also missed out on the UEFA Super Cup after defeat to Liverpool.

Nevertheless, there is still a long way to go this year and he’ll be hoping that they can compete across the domestic competitions as well as making a positive impression on their return to the Champions League.

Having that experience as a player to draw on will be priceless, but perhaps more importantly, he showed at Derby last season that he has the coaching ability to do well but the level of pressure and expectation will have risen significantly this season, particularly given his ties to the club.