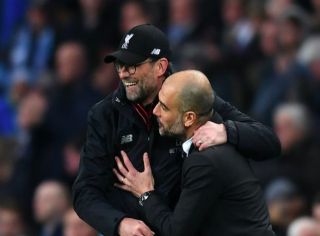 Jose Mourinho is of the opinion that club structure is the reason why Manchester City and Liverpool are so far ahead of all the other Premier League clubs.

The two sides were involved in a very close title race last season which saw Pep Guardiola’s side edge Jurgen Klopp’s team by one point. Even this year, it seems like it’ll go down to Liverpool and City fighting for the Premier League.

SEE MORE: ‘He will be absolutely superb’ – Liverpool star tipped to take game to new levels in coming years

Mourinho feels that the structure of the clubs is why these two sites stand out from the rest. Speaking to the Telegraph, the former Real Madrid and Chelsea manager said: “I think the structure of the clubs. When you look at City, for example: the owner, Ferran Soriano [chief executive], Txiki Begiristain [director of football], Pep Guardiola, Pep’s staff and then the players. This looks like harmony, empathy, chemistry, quality, sharing the same project, sharing the same ideas.

“Liverpool? I also think that Jurgen [Klopp] is in a good position. He is very stable. I think he has control of his ‘areas’. He is supported by people who think the same way, the structure of the club. “Ok, Pep: fantastic coach. Jurgen: fantastic coach. I think if tomorrow one of them leaves and another top coach comes – of course he has to be top like they are – the team will still be there [at that level]. I think performance is globality. I think basically it is that.”

Both Liverpool and Manchester City seem extremely ambitious given the kind of players they signed in the past couple of years. While City brought in John Stones, Kyle Walker, Ederson, Aymeric Laporte and Leroy Sane, the Reds roped in Mohamed Salah, Sadio Mane, Gini Wijnaldum, Fabinho, Naby Keita, Virgil van Dijk and Alisson.

Several of these signings have been instrumental in these two clubs dominating English football and there’s no doubt that they will do so for many years to follow.