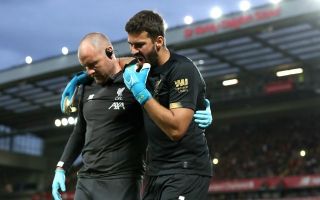 Liverpool manager Jurgen Klopp has said that Alisson is improving but the club are not taking any chances on him.

The Brazilian has established himself as one of the best keepers in the world thanks to his performances for Roma and now, Liverpool. Last season, Alisson kept 27 clean sheets across all competitions, winning the Premier League Golden Glove and the UEFA Goalkeeper of the Year award.

However, the 27-year-old had a forgettable start to 2019/20 as he injured his calf while taking a goal kick during Liverpool’s league opener against Norwich City. He has since been out of action with Adrian replacing him in goal.

Klopp has said that Alisson’s condition is better nut there’s no telling as to when he’ll be back to full fitness. As quoted by Liverpool’s official website, the German said: “Funnily enough, we had lunch together [just now]; he looks good and he is improving, but we cannot put any pressure on it. It was a really serious injury in the calf. It is now much better, of course, and that’s good for us and good for him, but we don’t know exactly [how long it will be].

“The target was always after the next international break [that] he could be ready, but we don’t know. So, as I said, there is no pressure and hopefully everything will be fine for the rest of the season, that’s the plan.”

Adrian has done pretty well for Liverpool so far but the club will certainly prefer having their first-choice keeper between the sticks with some pretty tough matches ahead.

Liverpool play their 5th Premier League match against Newcastle United today at Anfield after which, they take on Napoli at the Stadio San Paolo.