The relationship between a player and his agent is a fairly fascinating one. The player will feel the agent will look after their best interests, but the only way the agent makes any money is by constantly having his client move around. According to reports, Mino Raiola has Wilfried Zaha in his sights.

The Daily Mail reported that Zaha wanted to find a new agent after failing to secure a move to either Arsenal or Everton last Summer. They go on to suggest that Raiola is poised to pounce and add Zaha to his impressive client list.

If he does end up with Raiola representing him, you can be sure he will find himself a move pretty soon.

A look at Raiola’s client list shows how often he likes to move his players about. He represents Zlatan Ibrahimovic, Paul Pogba, Moise Kean, Mario Balotelli and Henrikh Mkhitaryan. If you consider how often they have moved or been constantly linked with an exit, it shows what will likely lie in store for Zaha.

His next move will be interesting in terms of where he goes and when it happens. It’s pretty rare to see big clubs spending a lot of money in January, so a move to Arsenal this Winter seems pretty unlikely.

Perhaps Everton will rekindle their interest and hope he can provide a spark for the second half of their season.

Either way, it will be really interesting to see how much Crystal Palace eventually get for their star man, and if it’s more or less than they turned down in the Summer. The BBC reported that Everton offered £52m plus Cenk Tosun and James McCarthy in exchange for the Ivorian.

The figures attached to Arsenal’s interest are a bit less clear, however the Metro did claim they offered £65m plus Reiss Nelson on loan in an effort to sign Zaha.

It’s just another unwelcome distraction for Crystal Palace fans, as much as it might hurt, they might be best advised to get what they can and try to move on. 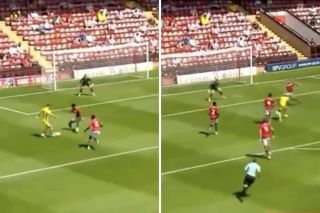