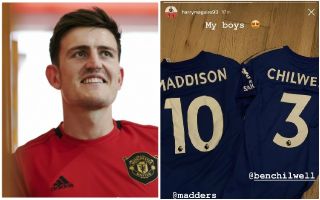 Harry Maguire has excited some United fans with his latest Instagram post, should the Red Devils convince Leicester stars James Maddison and Ben Chilwell to join him in Manchester.

All eyes were on England international Harry Maguire this afternoon as Man Utd’s record signing faced off against former club Leicester City and his solid defending ensured that the Red Devils came away with a victory.

After the clash, Harry Maguire posted a picture to his Instagram story which shows that he received the shirts of Leicester duo James Maddison and Ben Chilwell.

The pair have been exceptional for the Foxes over the last year and United could certainly do with their talent if they’re to get back to the top anytime soon.

Here’s the social media post that has sparked chatter among some fans:

The Metro report that United are interested in midfielder Maddison. Links with Chilwell haven’t appeared in the media, but given Luke Shaw’s injury problems this would be another fantastic potential signing for the Red Devils.

Ole Gunnar Solskjaer’s side are lacking a cutting edge in midfield, something that Maddison would definitely add.

Chilwell’s signature would finally add some stability to the left-back position for the Manchester outfit.

Agent Harry bring them to united next season

Agent Slab Head. U Love To see it ?

Replacement for lingard and luke shaw ?????

At least one of them next summer,Agent Maguire has this covered

Could Maguire be the key to United signing two of the Premier League’s biggest young stars next summer?