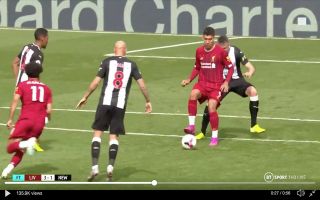 Liverpool forward Roberto Firmino can’t stop impressing fans with his magnificent abilities so far this season, the Brazilian pulled off this stunning assist to Salah.

Describing the piece of magic as simply a backheel flick doesn’t do it enough justice, it’s very rare that we something as special as this.

The Reds beat the Magpies 3-1.

Take a look at the Brazilian teeing up his teammate below:

This angle shows just how filthy Roberto Firmino's assist for Mo Salah was. ?

This has to be illegal… Bobby Firmino what an assist!!!!!???? pic.twitter.com/HCqjfpTEqb

Roberto Firmino was at his brilliant Brazilian best this afternoon ?

"You think you'd swap him for Messi or Ronaldo…

…but for what he gives to this football team, there aren't many better!"

His role in Mohamed Salah's goal was just sublime ? pic.twitter.com/ftdhEdIqVk

Firmino has been sensational for the Reds so far this season, it’s becoming apparent that the Brazilian is actually he most important player in Liverpool’s uber-attacking system.

The selfless forward works tirelessly during matches and often sacrifices goals for himself to assist teammates like Salah and Sadio Mane.