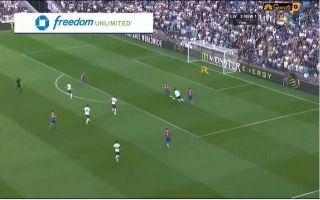 Son has really started to emerge as a key player for Spurs in recent months. Of course his Champions League heroics would always make him a fans favourite but he’s becoming increasingly reliable in front of goal. He showed his class again today to put Spurs ahead against Crystal Palace.

He collects a fairly hopeful long ball over the top and completely fools the defender and keeper who look like they are expecting him to go for the far post. He closes his foot and tucks it away at the near post leaving the keeper no chance:

A lovely finish from Tottenham Hotspur attacker Heung-Min Son as he collects from Toby Alderweireld’s beautiful ball over the top, cuts inside and fires into the bottom corner to grab his first of the season and put Spurs ahead! #THFC #COYSpic.twitter.com/IUBGNHDnFw

Great goal by Heung-Min Son who scores the opener for Spurs against Crystal Palace!#TOTCRY

Crystal Palace look completely lost and this could go on to be a pretty easy win for Spurs.