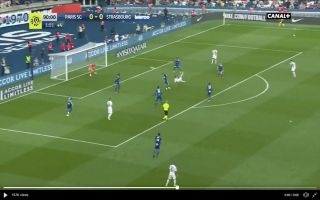 Brazilian superstar Neymar silenced his critics today by scoring a dramatic last-minute overhead kick to secure a win for PSG in their Ligue 1 tie vs Strasbourg.

In the 91st minute of Paris Saint-Germain Ligue 1 clash against Strasbourg today, summer signing Abdou Diallo played a pinpoint cross into the box and a moment of magic from Neymar silenced his critics.

The Brazilian superstar, who was at the centre of a massive transfer saga this summer, managed to score a sensational overhead kick in the last minute to steal a victory for PSG.

Check out the superstar’s amazing winner below:

Neymar was booed extensively against Strasbourg then he did this in injury time. pic.twitter.com/ZsdHBh8IEl

Take a look at some of the abusive chants towards the Brazilian before the game:

Neymar plays for PSG for the first time after his long transfer saga in the summer.

PSG fans welcome him with a “Neymar hijo de p…” (Neymar, son of a b****) chant. pic.twitter.com/PZocu8FnXt

After such a public transfer saga can Neymar really become a fan favourite in Paris again? We think a few more overhead kicks will be needed to win over fans.

Liverpool star could be out for more than six weeks, might even be a doubt for Euros
More Stories Neymar Strasbourg Thomas Tuchel