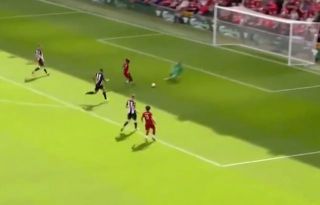 Sadio Mane was in fine goalscoring form on Saturday as he bagged a brace to help Liverpool turn things around against Newcastle Utd at Anfield.

Jetro Willems had given the visitors the lead early on, but it was merely going to be a matter of time before the pressure from the hosts told.

Mane produced a superb finish to draw the Merseyside giants level, and it wasn’t long before he was on the scoresheet again to give them a 2-1 lead heading into the half-time interval.

It will have been a relief for some at Anfield to see them get that second goal before half-time, as there would perhaps have been a few nerves that the international break had disrupted their momentum.

It doesn’t appear to have knocked Mane off course at all though, as the Liverpool forward was alert and ready to produce real quality to help himself to two goals in the opening 45 minutes.

As seen in the video below, he pounced on a 50/50 with the Newcastle goalkeeper and as the ball squirmed behind him, Mane was on hand to apply the finishing touch to bag his second of the game.

Firmino doing what he does best. Doing the dirty work in the buildup to win the ball back and providing Mane with the goal. pic.twitter.com/0a6xLRG26m

When life gives you lemons, Sadio Mané puts them in the back of the net. pic.twitter.com/QfhnF4DLff

Liverpool go ahead for the first time today and it was almost far too easy! pic.twitter.com/qbgw8kP7st