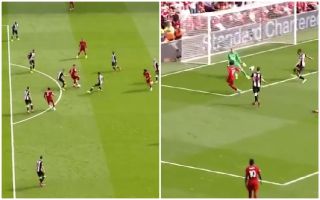 Mohamed Salah got on the scoresheet for Liverpool against Newcastle Utd with a big helping hand from some outrageous quality from Roberto Firmino.

The Reds found themselves behind early on after Jetro Willems struck with a brilliant effort, but a double from Sadio Mane ensured that they went into the half-time interval with a lead.

After piling the pressure on the visitors after the break and creating countless chances, it was Salah who eventually created daylight between the two sides with a brilliant finish of his own after some excellent build-up play.

However, as seen in the video below, it was all about Firmino’s assist, as the Brazilian forward produced a superb bit of skill to put his teammate through with a great first touch and flick round the corner and Salah did the rest.

To not only have the vision but also the quality to execute it perfectly shows why Firmino is so important for Liverpool, and he’ll surely not get tired of watching this over and over again.

And that Roberto Firmino flick ? pic.twitter.com/o0yZsMPvvb

Champagne football from the Reds ?

Firmino and Salah combine for a glorious goal!

Roberto Firmino and Mohamed Salah combine to put this one away surely! pic.twitter.com/rgHiUafH4u