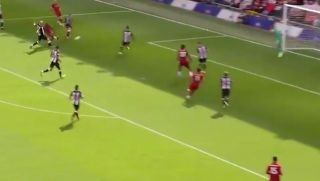 Liverpool were stunned after falling behind early on against Newcastle Utd at Anfield, but they found an equaliser through a brilliant strike from Sadio Mane.

Jetro Willems had scored a stunning goal of his own to give the visitors the lead, as they did well to frustrate the Reds as tension began to increase slightly at Anfield.

Just minutes after they felt aggrieved not to have been awarded a penalty, Mane stepped up and delivered as he so often does for the Merseyside giants, as seen in the video below.

After some excellent build-up play involving Andy Robertson, the Senegal international did the rest as he found a pocket of space in the penalty box and curled a stunning effort into the back of the net in the opposite corner.

That will undoubtedly have settled Liverpool after a shaky start, as they go in search of a fifth consecutive win to start the Premier League campaign.

? Class from Robertson.
? Deadly from Mane!

Sadio Mane goes top shelf to put the game back on even terms! ? pic.twitter.com/QRKDZAQoci