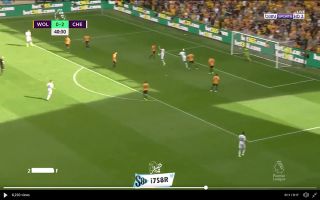 After a relatively quiet opening to the game, Tomori opened the scoring with this sensational effort in the 31st minute.

The ace’s strike definitely inspired the rest of the team as they went on to grab two goals before the halftime whistle blew, prolific youngster Tammy Abraham scored both.

Abraham put the Blues 2-0 up with a superb turn and finish in the 34th minute.

The one-time England international managed to extend Chelsea’s lead again before halftime by scoring a superb header in the 41st minute of the clash.

Left-back Marcos Alonso played a pinpoint cross into the box and Abraham got in front of his man to nod the ball into the back of the net.

Check out the 21-year-old’s bullet header below:

This is Abraham’s 6th goal in the Premier League this season, he’ll surely get the chance to add to his one England cap in the next international break.

Tomori’s opener seemed to startle Wolves and the Blues scored a further two goals in the final 15 minutes of the first-half.

Frank Lampard has got his youngster firing at all cylinders this season, is this the start of a new dynasty for the west London club?