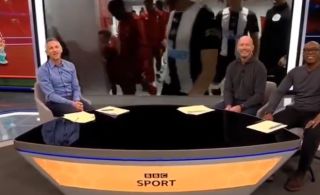 Match of the Day host Gary Lineker cheekily trolled Alan Shearer on the show last night amid the ongoing row between him and former team-mate Michael Owen.

The pair notably played together for Newcastle and England, but recently got into a public spat on Twitter, which Owen has put down to a long-running grudge since the end of their time together at St James’ Park.

Not sure you are as loyal to Newcastle as you make out mate. I distinctly remember you being inches away from signing for Liverpool after Sir Bobby Robson put you on the bench. You tried everything to get out. https://t.co/ZQBrlojeEv

“A year after I left Newcastle, I was talking to a mate who is a friend to both of us, and said I should give Alan call about that. He said ‘I wouldn’t if I would you mate’,” he told the Daily Mirror.

“I said: What?!! That’s how I found out. There was nothing, I don’t dislike him. Unless I can’t read people, I had no idea for like a year or two after Newcastle got relegated, that he had a gripe with me.

“I hadn’t any clue, I was like “oh, you are joking’. And then it all came out. I’ve got no problem, with him – it’s just he has an issue with what he thinks I did wrong in that last game of the season against Aston Villa.

“If Alan Shearer has come to the conclusion that I didn’t fancy playing in the last game against Aston Villa because I was worried about getting injured and worried about my next move then that’s fine in a way.”

See the clip above as Lineker jokes that Shearer, sitting alongside Wright, is finally alongside a former England striker he does get on with.

The presenter also refers to the upcoming highlights of the Liverpool-Newcastle game as the Michael Owen Derby, as he notably played for both teams.