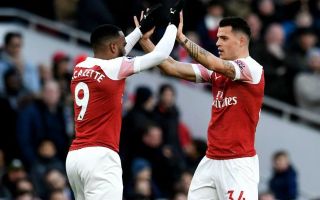 Arsenal manager Unai Emery has praised midfielder Granit Xhaka who has recently come under immense criticism due to his performances.

The Swiss international has made 137 appearances for the Gunners since joining them from Borussia Monchengladbach. So far, Xhaka has scored 11 goals and has provided 16 assists across all competitions.

SEE MORE: Unai Emery performs U-turn on Arsenal star after urging him to leave this summer

The 26-year-old was heavily criticised after a reckless challenge in the North London Derby saw Tottenham win a penalty which Harry Kane converted. Given that the match ended in a 2-2 draw, Xhaka was bound to be slammed as Arsenal could’ve won the game had he not conceded that penalty.

However, Emery feels that the Switzerland captain is a very important player and brings balance to the midfield. As quoted by the Sun, the Spaniard said: “We’ve been speaking — mistake, recognise that mistake, learn, correct, improve and after repeat with success. Every player makes mistakes, only some are magnified because the consequence is more.

“But I am really focused on the good things, on the positive performances and Xhaka has a big character and is very important for us. He played a very good match against Tottenham, he made a mistake that was a penalty, he knows and we are working to improve, to change that mistake in one process.

“Of course, he gives us a very good balance in the middle with the ball and without the ball. I think he is very important for us. We can talk about the defects for every player, for him also, but we can speak about positive things, the very positive performances he gives us in most matches.”

Everyone who has seen Xhaka on the pitch knows that he has a lot of character and good leadership qualities in addition to being a pretty good midfielder. Of course, he has to refrain from making reckless challenges which might affect him and the team.

Xhaka will hope to lead Arsenal to victory today when they face Watford at Vicarage Road.