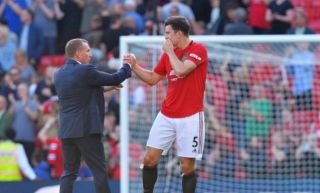 Manchester United defender Harry Maguire has hit out at some fans of his old club Leicester City as he got a frosty reception from them yesterday.

The England international left Leicester for Man Utd in the summer transfer window, and faced his old club for the first time since the move in a 1-0 victory for Ole Gunnar Solskjaer’s side at Old Trafford.

Maguire clearly seemed surprised to be booed by his former fans, and it’s fair to say he’s probably justified in that feeling as he served the club well during his time there and didn’t seem to do a lot to force his way out of there despite leaving this summer.

Clearly not too impressed, Maguire tweeted a sarcastic ‘thanks for the reception’ message below, followed by a shrugging emoji, suggesting he didn’t understand the hostility towards him.

Good luck to @lcfc for the rest of the season… thanks for the reception ?????? pic.twitter.com/r6ajpX2m7T

One or two Leicester fans in the replies even admitted the treatment from some at Old Trafford was harsh.

Sorry for the reaction you got from many of my fellow Leicester fans. Most real fans appreciate your passion and what you did during your time at the club. ?

I rate that tbf, Good luck for the rest of the season. See you next year in the europa ?

Don’t worry Harry, it’s not all us Leicester fans, some are still bitter about you leaving, don’t know why?, it was the same when Kante left, they will get over it and will soon be applauding you, as they now do with Kante. Best of luck.

Don’t take much notice of the stick you took today from us lcfc fans slab head. You know we love ya, always will. Great professional and can get better. You’ll prove all these doubters wrong. ?