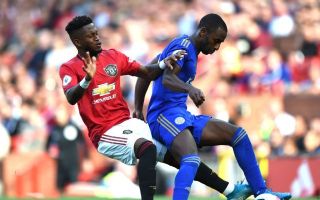 Fred made his first appearance of the season for Manchester United yesterday in the team’s 1-0 win over Leicester City.

The Red Devils picked up their first three points since their opening day win over Chelsea, and even though Fred didn’t start the match, it seems he made an impression after coming off the bench.

The Brazil international didn’t exactly impress in his first season at Man Utd last term, despite arriving with plenty of expectation on his shoulders after a big move from Shakhtar Donetsk.

Fred may now be more settled, however, and there could be more of a route into the starting XI for him following the departure of Ander Herrera in the summer.

Win! ✅ Well done guys! I'm glad to be back. Thanks for all the support. #GGMU #LetsGo #ManUtd #ManchesterUnited #FredRodrigues #CmonMAnUtd #PL #PremierLeague

Scott McTominay’s improvement means that is not by any means guaranteed, but it seems a lot of United fans now want to see Ole Gunnar Solskjaer show more faith in Fred after largely freezing him out at the start of this season.

Here’s some of the response to his cameo on Twitter…

Most underrated player in our squad,
Fred should be given a chance next
to Pogba and Mctominay in midfield pic.twitter.com/hItFBNtkLl

Fred should start every game!! https://t.co/e0lCkE8xee

Fred looked bright when he came on today. Deserves a start next week. Not sure Matic and Mata should be making match day squads anymore. Both useless today. #MUFC

After last nights game, in which Mata and Matic wouldn’t make my Sunday league team, we learnt the midfield three of McTominay, Fred, Pogba should start every game when fit. James is a lock down the left, Martial and Rashford rotating playing through the middle. Come on #ole