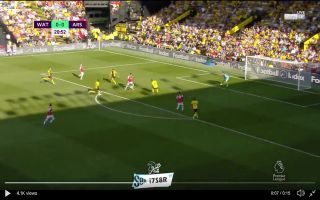 Arsenal superstar Pierre-Emerick Aubameyang has handed the Gunners the lead against Watford at a crucial point in the game, take a look at the lovely finish.

Arsenal have the lead against Watford after Pierre-Emerick Aubameyang’s superb strike in the 21st minute of this afternoon’s Premier League clash.

Real Madrid loanee showed that he can do the dirty work in midfield by winning the ball with a tough tackle on Hornets star Will Hughes.

Sead Kolasinac charged down the left-flan before finding Aubameyang and the Gabonese star used a lovely touch to set up a wonderful turn and a superb finish to give his side the lead.

Ceballos with the tackle. Kolasinac with the pass to Aubameyang. Clinical finish. 1-0 #Arsenal. pic.twitter.com/Lzu4hIDES5

Aubameyang is Arsenal’s main man, with these stats showing just how important he is to the team:

Aubameyang scored at a great moment, Unai Emery’s side had been on the back-foot for the majority of the game until the opener.