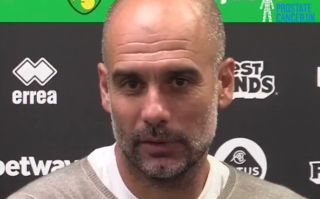 See below as the City boss jokingly congratulated Liverpool on winning the Premier League title already, with just five games played so far.

Pep Guardiola,“Congratulations Liverpool, you are the Champions.”

“We’re in September, what can you do?”

The Reds sit five points clear at the top after a perfect start to the 2019/20 campaign, and while it’s a boost to have achieved a decent lead over City already, everyone surely knows there is still far too long to go to draw any conclusions.

Guardiola will no doubt be aware of his line attracting headlines in what is surely an attempt to distract and unsettle Liverpool.