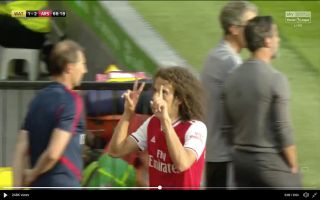 Arsenal ace Mateo Guendouzi has had a moment to forget for the Gunners today, the Frenchman mocked Watford fans with a 2-1 gesture only for his side to draw.

In the 66th minute of Arsenal’s clash with Watford today, young midfielder Mateo Guendouzi was substituted for Lucas Torreira and the Frenchman couldn’t help but send a parting message to Watford fans.

The 20-year-old stuck his fingers up to the fans, gesturing the then 2-1 scoreline. Guendouzi’s attempted parting shot at Vicarage Road ultimately backfired as his side drew.

Unai Emery’s side had a two-goal lead but their performance in the second-half was shocking, their defenders made costly errors when they couldn’t deal with the pressure that was coming their way.

Take a look at the Frenchman’s attempt to rattle the Watford fans which ultimately backfired below:

Arsenal fans will be left scratching their heads after their side allowed Watford to come back into the tie.

Here’s how some fans reacted to the performance, many are calling for Unai Emery to be sacked and for these players to be shown the exit door with him.