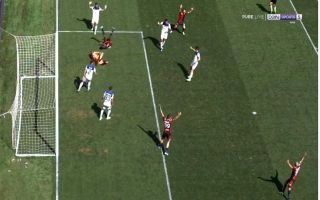 I’m sure we all expected some teething problems with VAR when it was introduced but it’s starting to get ridiculous. Obvious decisions are not being overturned, taking 5-10 minutes on some occasions to see if something is or isn’t a penalty (clear and obvious anyone?) and games being reduced to hammering the ball at opponents in the box and hoping it hits a hand somewhere.

We got the latest shameful edition of VAR failing in Serie A this afternoon as Genoa were awarded a 90th minute penalty to level their game against Atalanta.

It looked soft on first viewing, and replays show there was absolutely no contact on the player who goes down:

Bizarrely the broadcaster Premier Sports have taken down the footage showing the award and now just show the penalty being scored.

The ref didn’t seem to indicate the decision was reviewed and the camera angle clearly showing no contact was only shown on the live broadcast after the penalty was scored.

There is a happy ending for fans of instant karma, Atalanta went up the other end and scored a late winner thanks to this stunning strike from Duvan Zapata:

?? Zapata makes it 2-1 to Atalanta with the last kick of the game to beat Genoa! pic.twitter.com/jhj1su4nYy