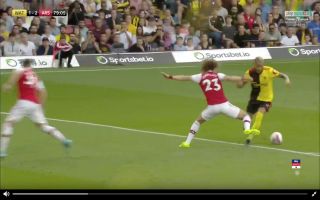 Watford ace Roberto Pereyra has equalised for the Hornets from the spot after he was brought down by Arsenal defender David Luiz, the Gunners have wasted their lead.

In the 79th minute of today’s Premier League clash between Watford and Arsenal, the Hornets charged forward on a dangerous counter-attack and Gunners defender David Luiz brought down Roberto Pereyra just inside the box.

Pereyra made Luiz look like a fool with some silky dribbling and the former Chelsea star recklessly brought down the playmaker with a rash tackle.

The Argentinean stepped up and sent Bernd Leno the wrong way with a lovely penalty.

Take a look at Luiz bringing down the attacker in the box below:

Pereyra stepped up confidently and converted the penalty:

Arsenal have now conceded a penalty three games in a row, this just isn’t good enough for a team that are targeting a Champions League finish.

To make matters worse Luiz’s costly error wasn’t the only one from an Arsenal player during the game, his centre-back partner Sokratis gifted Watford with the goal that got them back into the tie.

Arsenal’s defence wasted a two goal lead in the second-half.