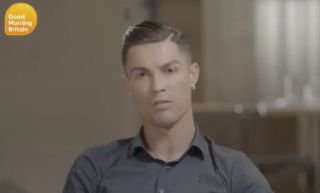 Cristiano Ronaldo has spoken about how recent rape allegations against him affected him and his family.

Speaking to Piers Morgan in the video below, the Juventus star reveals he felt embarrassed seeing the story on the news at home, changing the TV channel before his son came into the room.

Cristiano Ronaldo opens up to @piersmorgan about the shame he felt when he was accused of rape.

You can watch the full interview on @ITV on Tuesday at 9pm. It’s also available on the ITV Hub.@Cristiano | #RonaldoMeetsPiers | #GMB pic.twitter.com/5gtZN2npYE

Accusations against Ronaldo have mainly come up via reports in Der Spiegel, relating to an alleged incident in 2009.

There have not been any further developments in the case for some so it remains to be seen if any more information will come to light, but Ronaldo has previously insisted he is innocent, with this tweet in October 2018 responding to the accusations made against him: